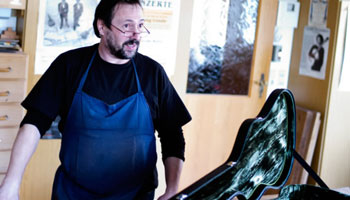 Beginning in 1974, Hermann Hauser III and his father built guitars independently in the same workshop. Hermann Hauser III provided his instruments with his own numbering and signature. Andres Segovia attested guitars of Hermann Hauser III undescribably beautiful sounds, and Pepe Romero simply calls his Hauser guitar the classical guitar with the purest sound. The secret of the sound of a Hauser guitar is to be found not only in technical processing. Just like his ancestors, Hermann Hauser III cultivates the personal and amicable relations to his guitarists. Depending on the artists´ wishes, he tunes his guitars to specific sound frequencies. Before constructing neck profiles and finger boards, and before determining the length of the strings, there´s a deep analysis of the artist´s needs and demands. It is fundamental, that Hermann Hauser III spends time on studying historical instruments, especially those of his ancestors. From this, both supreme works of restoration of historic guitars and new development of special limited editions, emerge. For his work, Hermann Hauser III received highest awards from professional organisations and highest acknowledgement of the international guitar community. In order to build guitars at a level of highest perfection, he counts on: sure instinct, especially for the guitarist´s way of playing, a feeling for forms, to give musical aesthetics to the instruments, handcraft talent, to correctly process the living resource wood, musicality, to recognize the sonority of the instruments, and, above all: love for the profession.

Manufacturing a guitar takes Hermann Hauser III between 150 and 240 hours of work. A maximum of 17 guitars per year can be output from the Reisbach worshop.

The waiting period for a new instrument is about five years. Because involving plenty of time is the only way for an artistic guitar to arise, just like Andres Segovia wrote into the Hauser family guest book: “A friend for the rest of your life”.