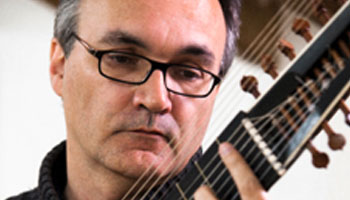 A native of Frankfurt, Andreas Martin began his musical development with the study of the classical guitar under Prof. Dr. Mario Sicca at the Stuttgart Musikhochschule and under Ruggiero Chiesa at the Conservatorio di Musica Giuseppe Verdi in Milan.

In addition to his musical interests, he also devoted himself to the study of English and Romance Languages and Literature and Philosophy at the University of Heidelberg.

A strong interest in Renaissance and Baroque music ultimately led him to one of the most renowned institutes for Early Music, the Schola Cantorum Basiliensis, where he took up the study of the lute with Eugen Dombois, Hopkinson Smith and Peter Croton. While in Basel, he also attended master classes given by such artists as Emma Kirkby, Anthony Rooley and Nigel North.

An expert on the lute music of Johann Sebastian Bach, Martin has earned worldwide recognition for his recording Bach – Works for Lute on the Harmonia Mundi label, which is regarded as a benchmark performance among critics. His discography also includes the highly praised English Folksongs and Lutesongs, the fruit of a long collaboration with the countertenor Andreas Scholl.