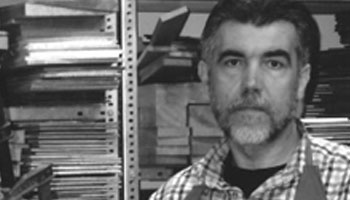 Antonio Morales Nogués was born in July 1956 in Monesterio (Extremadura). After a brief stay at Seville, at the age of 15 he moved to Palma de Majorca where he is currently living. His love of guitar building started already in his early years, we could say it has been there all the time, since he worked as a child in a cabinetmaker’s workshop.

His interest in guitars lead him to get in touch with George Moore Bowden, a prestigious guitar builder living in Palma, who accepted him as a pupil. This way a great friendship sprang up between them. Antonio was astonished by George M. Bowden’s knowledge of guitars and love for them and he also gave in to this instrument’s magic. He left the cabinetmaker’s workshop of his own and devoted himself wholeheartedly to his great passion to be: guitars.

Master and pupil worked over years with passion and enthusiasm and brought into practice secrets and theories collected by Bowden during his years of research.

My master was first and foremost a researcher, he devoted the last 30 years of his life to research intense, selfless and persistently and each guitar he built was created to include his discoveries.Thanks to those many years of experience the guitars coming out of our workshop are an own design.

After his master’s death, Antonio Morales became successor and follower of George M. Bowden’s school. Bowden left him all he had about wood, plans, machinery and knowledge so he could continue making guitars of that quality that both of them together had dreamt of.