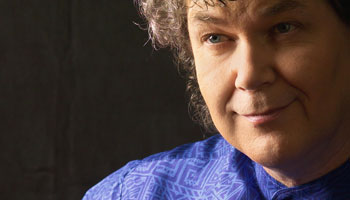 Hucky is widely regarded as one of the world’s top classically-trained world guitarists. He was born in the musically vibrant south-west region of Germany, in the town of Sulzburg. He started playing guitar at a young age and completed his Masters degree in classical music while still in his early twenties. In the thirty years since completing his studies he has taken his unique and dazzling guitar style around the world, delighting audiences everywhere, earning him the nickname of “Musical Ambassador between East and West.”. As a regular performer on five continents, he has performed for royalty, heads of state, South American Indians, Asian hill tribes, African children, at the world’s leading guitar festivals and with Thai pop stars and musicians.

Hucky is always searching for new and challenging music to add to his repertoire. Though trained in classical music, he has developed his own musical repertoire of great diversity that bridges the cultures of East and West and blends classical with folkloric and classical with popular.

He feels at home anywhere people enjoy good music but particularly in his adopted homeland, the beautiful Kingdom of Thailand, where his recordings of the music of His Majesty King Bhumibol of Thailand have made the classical guitar a fashionable instrument. Hucky remains committed to helping new generations of guitarists develop their skills and has taught at Chulalongkorn and Mahidol Universities in Thailand, the University of the Philippines, St. Cecilia Academy of Music and has also held Master Classes in Europe, Asia, the Americas and Africa. his pioneering work developing the classical guitar, Thais have dubbed him, “Godfather of Classical Guitar” in Thailand.

Hucky’s unique approach to music has led to some exciting collaborations with maestro Ravi Shankar, KITARO, Nina Corti, Xuefei Yang and Carlos Bonell. As classical guitarist, he has shared the festival stage with some of the greats, such as John Williams, David Russell, Jorge Morel, Paco Peña, the Los Angeles Guitar Quartet, Juan Martin, Costas Cotsiolis and Kazuhito Yamashita. He was also accorded the privilege of being invited to perform his last concert of the 20th century at the United Nations Headquarters in New York City – a rare honour for an instrumentalist.

Under his record label, AMI Records (Asia Music International Ltd.), and working as executive producer, Hucky has released many seminal albums on Thai music. His production of ranatmaster Khun-In’s Thai fusion music on the album Khun-In Off-Beat Siam – Thai classical with rock and jazz – drew great applause from international music fans. Moreover, Hucky has sought out the greatest Thai music masters, including National Artists, from Thailand’s four regions and has recorded them in high quality audio, for the first time ever, thus preserving traditional Thai music as it really sounds.

In 2011 Hucky accepted the position of Artistic Director of the annual Bangkok Guitar Fiesta.

In June 2012 Hucky was invited by the Royal Thai Embassy to performed a special concert to celebrate His Majesty the King’s 84th birthday at London’s famous Bloomsbury Theater. The concert for a full capacity audience was crowned with standing ovations.