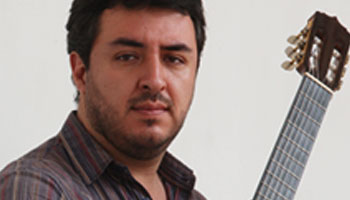 With performances in Mexico, the US, the Netherlands, Switzerland, Austria, England, Italy, Spain, Germany, Hungary, Malaysia, Singapore, Brazil, Paraguay, Argentina and Uruguay, Francisco Gil is one of the Mexican guitar players with bigger international recognition.

His interpretations have been transmitted via radio and television and critiques have granted generous praises to him. He has performed as soloist with the chamber Orchestra of Puebla (México), the Symphonic Orchestra of Michoacán (México), the Symphonic Orchestra of Kuala Lumpur (Malaysia), and the Chamber Orchestra of Mont Blanc (France). In Chamber Music he has performed together with Cuarteto Erasmus (Italy). His record works “Impresiones de América”, “El Esplendor del Laúd en el Barroco” “Sonatina Meridional”, “Solo Tarrega” and “Isaac Albeniz” were published under the label TASTO , and all of them include world premiere recordings.

The Italian classical guitar magazine “Il Fronimo” gave its welcome to “Sonatina Meridional”, which is dedicated to Manuel M. Ponce, expressing: “…to flow musically serene and distended…always sustained by an agreeable elegance.” “…has thrown new light on the art of his illustrious compatriot.” (Marco Riboni). On the other hand, “Classical Guitar” from England gave the following praises to his CD with music for lute of the baroque period: “… Gil generates an extraordinary and well focused contrapuntal texture…” “… a guitarist who clearly knows the area.”(Paul Fowels). Born in Mexico City, he graduated with the highest mark and summa cum laude from the Conservatorio Nacional de Música (Mexico) and the Conservatorio Antonio Vivaldi of Alessandria (Italy) with Marco Antonio Anguiano and Angelo Gilardino respectively.

Besides being professor at the Conservatorio de Música del Estado de México, he has extended his didactic activities by giving courses and conferences in Brazil, Uruguay, Paraguay, Argentina, US, Mexico, Spain, Italy and Switzerland. He is the artistic director of the International Concert Guitar Season. “Guitarras en Otoño”