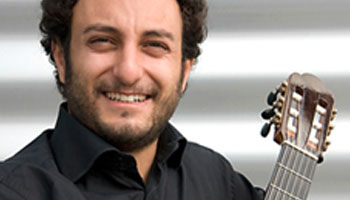 Stephan Schmidt at the Music Academy of Basel where he graduated, with distinction, in 2008.Feola has won several prizes in international competitions, such as the Fernando Sor Competition in Rome, the John Duarte Festival of Rust, Austria, as well as the Tokyo Guitar Competition in Japan. In 2005, he received the Italian National Arts Award Premio delle Arti from Letizia Moratti, then Italian Minister of Arts, Education, Universities and Research. Both as a soloist and in chamber music ensembles, Feola has performed in various concert halls and festivals such as the Roman Teatro Argentina, the Barattelli Concert Society of Aquila, the Benedetto Marcello Conservatory Hall of Venice, the Aula Magna of the Lugano Conservatory, the Bunka-Kaikan in Tokyo, the National Auditorium of Music in Madrid, the Concert Hall of the Tchaikovsky Conservatory of Moscow and at the Schleswig Holstein Music Festival in Northern Germany.

In 2010, he recorded the unabridged version of the Suite Española Op. 47 and the Cantos de España Op. 232 by Isaac Albeniz for the Dutch label Brilliant Classics In addition, Pino Feola passionately pursues his teaching career at the City of Basel Music Academy – both at the Music School as well as the Conservatory where he works as the assistant of Prof. Stephan Schmidt. For his guitars, Pino Feola uses strings produced by the Hannabach company.