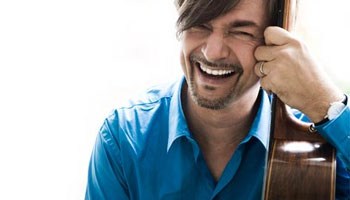 An acoustic guitar, a voice, charisma – that’s all it takes to pleasantly distance oneself from the uniform mush of the German addiction to the superstar era. A strangely independent mix of hypnotic bass lines and rhythmic hits on the guitar body, melancholic melodies and euphoric harmonies touches the senses. Michael “Kosho” Koschorreck makes the love of music audible. A sound experience for friends of acoustic guitar music and timeless songs, uneitel, carefree and actually priceless. The current CD “All Sides Love” sounds the theme of love from different points of view, almost weightless like a colourful butterfly, magically attractive in sound, touching like a passionate kiss. Produced by Mathias Grosch and Kosho, the new album was recorded in Kosho’s own studio by longtime colleagues and friends: Tommy Baldu (drums, percussion), Ulrich Barteit (flute), Mario Garruccio (drums, percussion), Mathias Grosch (keyboards), Robbee Mariano (bass, voc) and Florian Sitzmann (keyboards). Mixed by Markus Born into kleine audiowelt and mastered by Chris Oz, the album will be released on April 8th nationwide as well as in Austria and Switzerland on the Heidelberg label blisstone and distributed by edel:kultur. Mother is bossa, father the blues.

Michael “Kosho” Koschorreck, born 1962 in Heilbronn/N., started his own radio show in his second hometown Worms in 1968 under the title “Oh happy day” on his home turntable, following the example of the then popular children’s show “Schlager für Schlappohren”. Koschorreck regularly played a Best Of from her parents’ record collection, which can thus be regarded as the most influential influence of the musician-to-be with her mix of Bossa Nova (“Orfeo negro”), “American Folk Blues Festival”, Easy Listening (José Feliciano, Andy Williams), Soul (“The 5th Dmension”), Psychedelic (“In-A-Gadda-Da-Vida”), Jeronimo, Franz-Josef Degenhardt, Reinhard Mey and everything the “Beatles” had been prepared to give of themselves until 1970.

In 1972 Koschorreck’s grandmother, a passionate musician herself, gave him his first guitar. It wasn’t easy to find enough players for a band at that time. Finally at the age of 14 Koschorreck could found his first band “Phoenix” together with friends and went through five more formations of different styles in a very short time, for which he wrote down his own songs under his school desk. As a bass player at the age of 16 he was fortunately accepted into the band of his two admired guitar teachers, but he left “Last Exit” again shortly afterwards to accept an exclusive offer from the Afro-American band “Afrodisia”.

Afrodisia: In 1978 played Koschorreck the lead guitar in this 10-headed funk band, which oriented itself with its own songs to bands like “Funkadelic”, “Maze” and “Crusaders” and recruited itself almost exclusively from GIs and civilian members of the US Army. The “way of life” of the soldiers and army kids stationed in his hometown Worms as well as in Mannheim and Heidelberg was a not always harmless, but lasting influence on the so far quite protected grown up middle class child. “Afrodisia”, he owes not only his name Kosho, but also a still perceptible but not completely unbroken enthusiasm for American funk, blues and jazz – and the entry into a scene whose atmosphere stretches from musicians and producers like Bill Summers and Jon Otis to the soul jazz legend Les McCann, with whom he would later also go on tour. The work with the older and more experienced musicians probably contributed to the self-confidence he needed to embark on his musical journey of discovery. This journey took him all over Europe, where he played with “Gitanes” on the streets of southern France, where he lived in Switzerland in band WSS and where he got to know the music of the Brazilian composer, singer and guitarist João Bosco, whose way of playing guitar and singing influenced the songwriter who had been infected with the “Orfeo Negro” fever since his childhood.

In the years that followed to study back in Germany, his interest in smoothly produced pop and jazz music increasingly gave way to the joy of a weird, cubistic musical thinking; “shattering glass instead of velvet curtains” was also the sound concept of the pop formation Soft Love, which emerged from former members of Guru Guru and future makers of Mardi Gras BB. Koschorreck climbed in for Hans Reffert, a former guitar guru from Mannheim, adapted his sound aesthetics and expanded his musical horizon to include the space between Kurt Weill and Einstürzende Neubauten. In ’88 and ’89, two coveted German rock awards were given to Gentle Love, yet Kosho left the band a little later in order to get more acquainted with the acoustic guitar and, above all, with the already