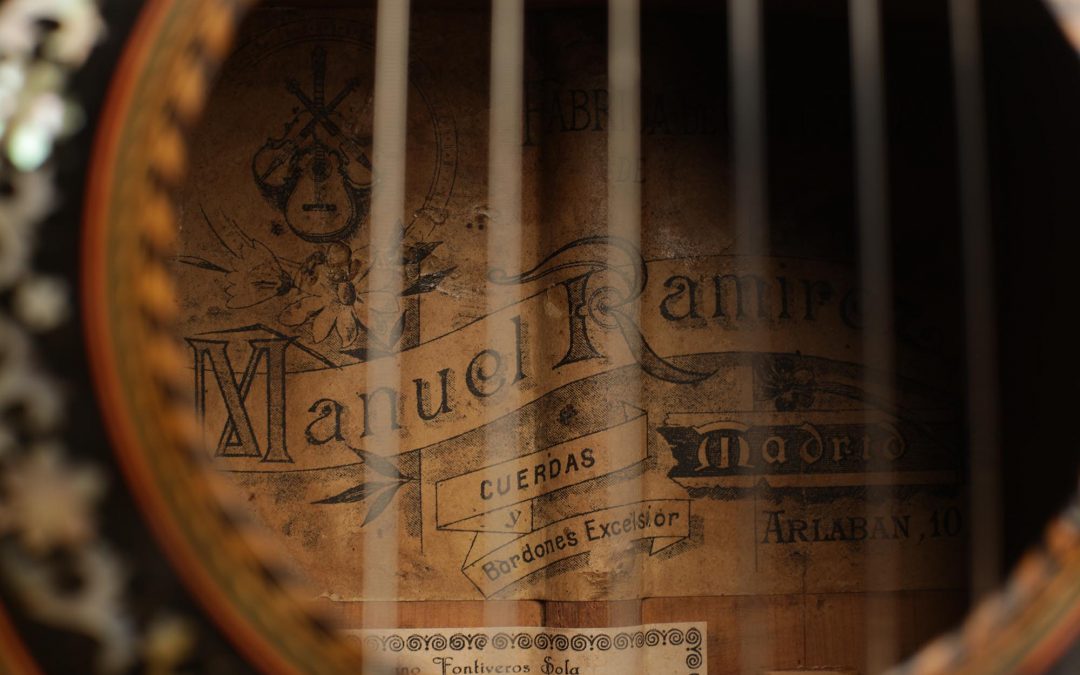 In 1864 Manuel Ramírez de Galarreta y Planell was born in Alhama de Aragón. Although the family’s habitual residence was in Madrid, their father’s profession led them to reside there for some time. Manuel learned from his older brother (José Ramírez I) the trade of guitar making. At the age of 27, around 1891, he decided to become independent. At first his idea was to settle in Paris, and when he told José, he helped him to carry out his project. But it is not known why Manuel changed his plans and ended up settling at 24, Cava Baja Street in Madrid, which sowed enmity between the brothers without being able to clarify the situation during his lifetime. After spending some time in Calle de la Cava Baja, Manuel moved his workshop to No. 5 Plaza de Santa Ana, and later to No. 10 Calle Arlabán, where he settled permanently. In a short time he managed to gain great prestige, not only as a guitar maker, but also as a maker of violins and other stringed instruments. He was appointed luthier of the Royal Conservatory of Madrid. He also continued the school started by his brother. The guitar makers that he trained, when they became independent, were recognised among the best builders of the time. These disciples were Santos Hernández, Domingo Esteso and Modesto Borreguero.

Given the success of the “Guitarra de Tablao” designed by his brother José, Manuel continued to build it, but little by little he developed his own template, until he achieved a flamenco instrument that continues to serve as a model for this type of guitar and which his disciples continued to use.

Around 1912, one of our best known anecdotes took place. A somewhat extravagant looking guitarist entered the workshop in Arlabán Street with the intention of renting a classical guitar. Manuel was amused by the proposal and decided to go along with it out of curiosity. He left a guitar for him to try out, while he continued his conversation with José del Hierro, a violin teacher at the Madrid Conservatory. Both of them became so engrossed in the young guitarist’s playing that the teacher tried to persuade him to give up the guitar and take up the violin without any success. Manuel, who had been listening to the conversation, decided to give him the guitar as a present on condition that he took it around the world, knowing that the instrument would develop wonderfully in his hands. This guitar is the one on display at the Metropolitan Museum in New York, and next to Manuel’s label appears the label of the repair that Santos Hernández subsequently carried out on it.