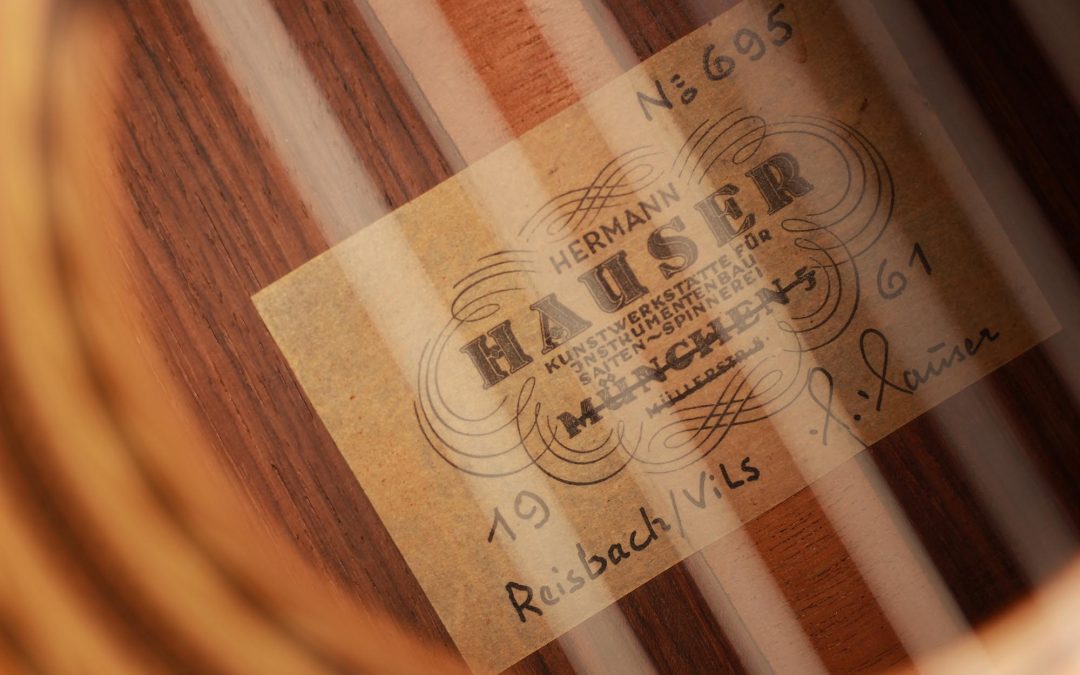 
Josef HauserJosef Hauser was born the son of an innkeeper in Burghausen, attended grammar school there and trained as a merchant and carpenter. During his apprenticeship, Josef Hauser also trained with the then famous zither teacher Jospf Wimmer. Soon Joseph Hauser wrote his first own zither compositions; he became a zither teacher and concert virtuoso. In Erding, very close to Munich, he rented an old barn and began building his first zither. After finishing his first instrument, he took it with him to Munich and asked for a permit for the residence of Duke Maximilian of Bavaria. Duke Maximilian, who was a great protector of the zither, welcomed him and played with him all night on this new instrument. The next day he was dismissed with a letter of recommendation, and so he decided to take up the profession of violin maker. He proudly called himself a zither maker and did justice to the building of zithers. It was not only zithers that he made, but also guitars, mandolins, violins and lutes.
Also in 1875 he founded his own publishing house for zither music to publish his compositions in folk music. After marrying a potter’s daughter, Josef Hauser moved to Munich with his workshop and publishing house.
In 1898 Joseph Hauser was awarded the great medal at the Joint Music Exhibition in Berlin, and Duke Maximilian of Bavaria presented him with the Medal for Art and Science.

Hermann Hauser I. (1882-1952)
The German luthier Hermann Hauser I., son of Josef Hauser, occupies a leading position among guitar makers worldwide. He learned the art of instrument making in his father’s workshop. Later he took over the workshop while his father was still managing the music publishing house. Hermann Hauser I specialized in lute and guitar making, but also spent time making zithers. In the field of the guitarist movement in Bavaria, Hermann Hauser I built a variety of different guitars, especially the Viennese models and the Munich models in all possible forms, but all of them to absolute perfection. The third, prime and the very rare quint bass guitars of Hermann Hauser I are of the highest quality. The sound of these instruments is still unsurpassed today. Based on his particular virtuosity, Hermann Hauser I developed technical, patented innovations in the construction of tops and body/neck joints. The Spanish virtuosos Miguel Llobet and Andres Segovia became aware of the art of guitar building by Hermann Hauser I at the beginning of the 20th century. The meeting of these forerunners and masters of their trade at the turn of the century can probably be called a magical moment in the history of the guitar.

“The fact that the Torres guitar has become the prototype for the construction of contemporary concert guitars is ultimately due in large part to the encounter of the Spanish virtuosos Llobet and Segovia with the Munich luthier Hermann Hauser (I)”.
Just like Antonio De Torres, Hermann Hauser I influenced many luthiers of the 20th century. It goes without saying that his guitars were and are played by many virtuosos and stars. In the Hauser family guestbook you can read about the intensive relationships between the luthier Hermann Hauser I and a large number of guitarists. These relationships are reflected in the specific names of Hauser guitars, such as Llobet model, Segovia model and Bream model.
The guitar Hermann Hauser I, which was played by Andres Segovia between 1937 and 1970, can today be viewed at the Metropolitan Museum of Art in New York.
As a result of the heavy bombing raids on Munich, which caused considerable damage to the Hauser family estate, Hermann Hauser I established his workshop for instrument making in Reisbach/Vils, Lower Bavaria.

Hermann Hauser III (born 1958)
Hermann Hauser III consistently continues the philosophy of his great ancestors. “Build only a few instruments so that you can vouch for each one, and work only for a few, but satisfied artists”. (Hermann Hauser I).
From 1974 Hermann Hauser III and his father built guitars independently of each other in the same workshop. Hermann Hauser III provided his instruments with his own numbering and signature. Andres Segovia attested the guitars of Hermann Hauser III indescribably beautiful sounds, and Pepe Romero describes his Hauser guitar simply as the classical guitar with the purest sound. The secret of the sound of a Hauser guitar lies not only in the technical processing. Just like his ancestors, Hermann Hauser III cultivates personal and friendly relationships with his guitarists. Depending on the artists’ wishes, he tunes his guitars to specific sound frequencies. Before the construction of neck profiles and fingerboards and before the string length is determined, a thorough analysis of the artist’s needs and demands is made. It is of fundamental importance that Hermann Hauser III is engaged in the study of historical instruments, especially the instruments of his ancestors. This results in top works of restoration of historical guitars as well as the new development of limited special editions. For his work Hermann Hauser III has received the highest awards from professional associations and the highest recognition from the international guitar scene. To build guitars of the highest perfection, he sets out to build: Sensitivity, especially for the guitarist’s playing technique, a feeling for forms, to give the instruments a musical aesthetic, craftsmanship, the correct processing of the living raw material wood, musicality, the recognition of the instruments’ sonority and above all: love for the profession.
Hermann Hauser III needs between 150 and 240 working hours to make a guitar. A maximum of 17 guitars per year can be produced in the Reisbach workshop.
The waiting period for a new instrument is about five years. Because only with a lot of time can an art guitar be created, as Andres Segovia wrote in the Hauser family guest book: “A friend for the rest of your life”.