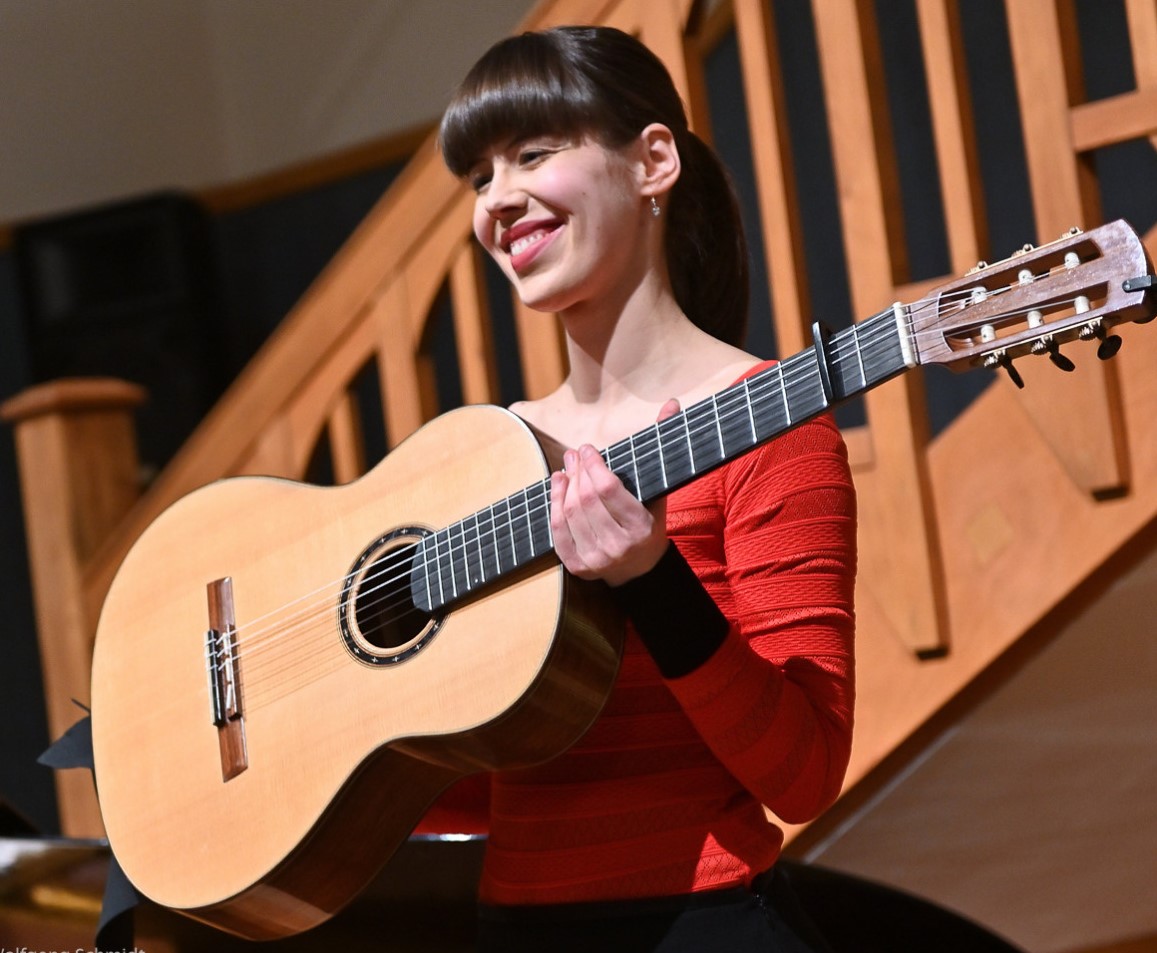 “A young artist – immersed in music”

As a soloist and chamber musician she has already performed at renowned festivals and concert series such as the Ludwigsburg Schlossfestspiele, the European Weeks Passau, the 39th Jihoceský Festival Czech Republic, the Schlossfestspiele Sondershausen, the Biennale ZeitRäume Basel, at “Young Stars Beethovenhaus Bonn” or at the “Kurt Weill Fest Dessau”. She played as a soloist with the Prague Radio Symphony Orchestra, was selected for the EMCY Chamber Music Tour “Stars of Tomorrow” and the German “Bundesauswahl Konzerte Junger Künstler”.

She completed all her music studies with distinction – the Diploma Studies (2013) in the class of Prof. Jürgen Rost at the “Franz Liszt” College of Music in Weimar as well as her Performance Master (2016) and finally in 2018 the Soloist Diploma under Prof. Stephan Schmidt at the Music Academy of the City of Basel.

“Judith Bunk took the audience into the world of strings in a way that hardly anyone was left untouched. From the very first moment she immersed herself completely in her own musical world and simply took her audience with her. On her guitar she spans a wide range from strong, hard sounds to delicate, wafer-thin ones, combining precise technique and empathy with incredible dexterity. Highly concentrated and completely immersed in the music, in her own playing, prăsentiert she has a versatile repertoire and likes to set contrasts. Her repertoire ranges from Dietrich Buxtehude and Johann Sebastian Bach to the Catalan composers Fernando Sor and Federico Mompou and Konstantin Vassiliev. Present at the beginning and at the end of the concert: the English lutenist John Dowland. “He must not be missing in the concert”, reveals the musician, who has won several awards, and who is also enchanting in general with the endearing, likeable way in which she explains the individual interpretations without any arrogance”.

“The woman who opens new worlds with her guitar – Judith Bunk comes from Freiberg and is an exceptional musical artist. Soon she has the highest music degree in Switzerland in her pocket. When Judith Bunk plays her guitar, she often has her eyes closed. “I can let myself fall into the music this way. I don’t concentrate on the notes or the finger sequences, but only on the music, which I can express so much more strongly,” she says: “It is the internalisation of the music that makes authentic expression possible, and it is the authentic expression that makes it possible for music to touch people. That is the most important thing for me”.

“She played the Suite BWV 995 in a flawless interpretation that caused real enthusiasm. Her playing is characterised by effortless ease in the most difficult passages, accompanied by a high level of musical expression. We will certainly hear a lot more from her”.

“She lets the guitar lament and cheer – the young artist plays with closed eyes, absorbed in the music. She is a master of quiet tones, plumbs the nuances of piano playing far and wide”.

“An evening of tender tones – She is 27 years young and recently completed her master’s degree with distinction: Judith Bunk. In the almost sold-out lecture hall of the Palais Adelmann she enchanted her audience with feather-light playing. One of the highlights were Manuel Maria Ponce’s Variations on “Folia de Espana”, which the Mexican composer wrote for his friend Andrés Segovia. A great prelude to the concerts spread throughout the year with acoustic guitar music of the finest quality”.

“Their sensitive and differentiated playing never seemed dusty, staged or artificial. Light as a feather, dreamily tender and impressionistic.

“It was an evening of quiet, sensitive tones, full of feeling for stylistically fine differences between Old English lute art, Spanish and South American folklore and the unmistakable sound of America. The evening sharpened the sense for a joy of life that is always lovingly packaged and sounds so intimate and vital.

“On the one hand it has a perfect tone, a wonderful sound, a fantastic touch, a great timbre of the guitar. On the other hand, the overall impression and the formation of the form were excellent. The obligatory composition by Jan Novák is not extremely difficult. It is played at every music school. But she performed it like a big piece. And that is what makes an artist.”

“There was every note, everything was well thought out and coherent. There was a quiet tension in the hall when Bunk Sor’s Adagio was celebrated with the greatest possible calm and suspense. No background noise of any kind influenced the sound culture. Everything sounds crystal clear, in fast passages virtuoso and brilliant”.

“Fernando Sor’s ‘Grand Sonata op.22’ was presented by Judith Bunk as light and mischievously as if the late Mozart had specialised in guitar concerts.

“Judith Bunk revealed an uncommon precision and delicacy and captivated with the most exact differentiation and virtuoso fluency.

“It radiated a presence and security that only those who had been on the technology platform could enjoy.