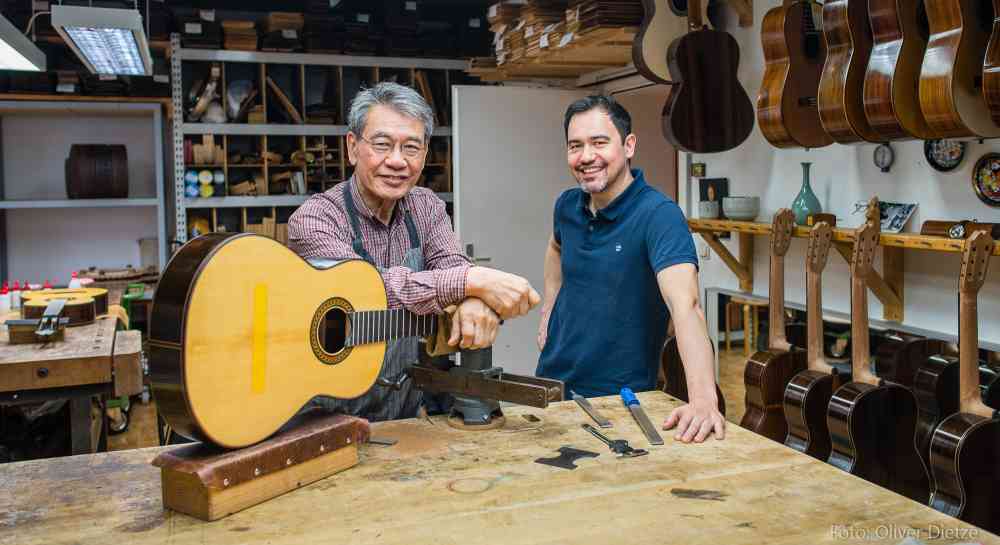 Kazuo Sato was born in Tokyo in 1946. In 1965 he began to learn his craft with master luthier Kuniharu Nobe. In 1965, Kazuo Sato began an apprenticeship with master guitar maker Nobe in Tokyo. In 1971 he went to Oxford/England to study with the famous master David Rubio, under whose guidance he built guitars and lutes for more than 4 years and perfected his skills. He opened his first workshop in Belgium in 1974 and settled in Germany two years later. With ever new ideas and innovations, he continues to drive the development of the traditional classical guitar to this day.
His son Hideo, who, like his brother, studied classical guitar with Prof. Ansgar Krause, followed the goings-on in the workshop with great interest from an early age. In 2011, despite a promising career in the software industry in Japan, he decided to devote himself fully to guitar building. After an apprenticeship of several years, he builds classical concert guitars together with his father. Hideo uses his father’s wealth of experience and realises his own ideas based on it. Even his first instruments were played and appreciated by well-known guitarists and professors.
We are committed to guitar culture by founding the classical concert series “Best of Guitar”, working as a board member of the society “Kultur und Gitarre e.V.” and supporting the Int. Guit. Festival Augsburg.
We regularly work with international artists for the sophisticated development of sound and playing characteristics. The world-wide sought-after concert guitarist and professor Takeo has been our most important advisor in this respect since the beginning of his career.