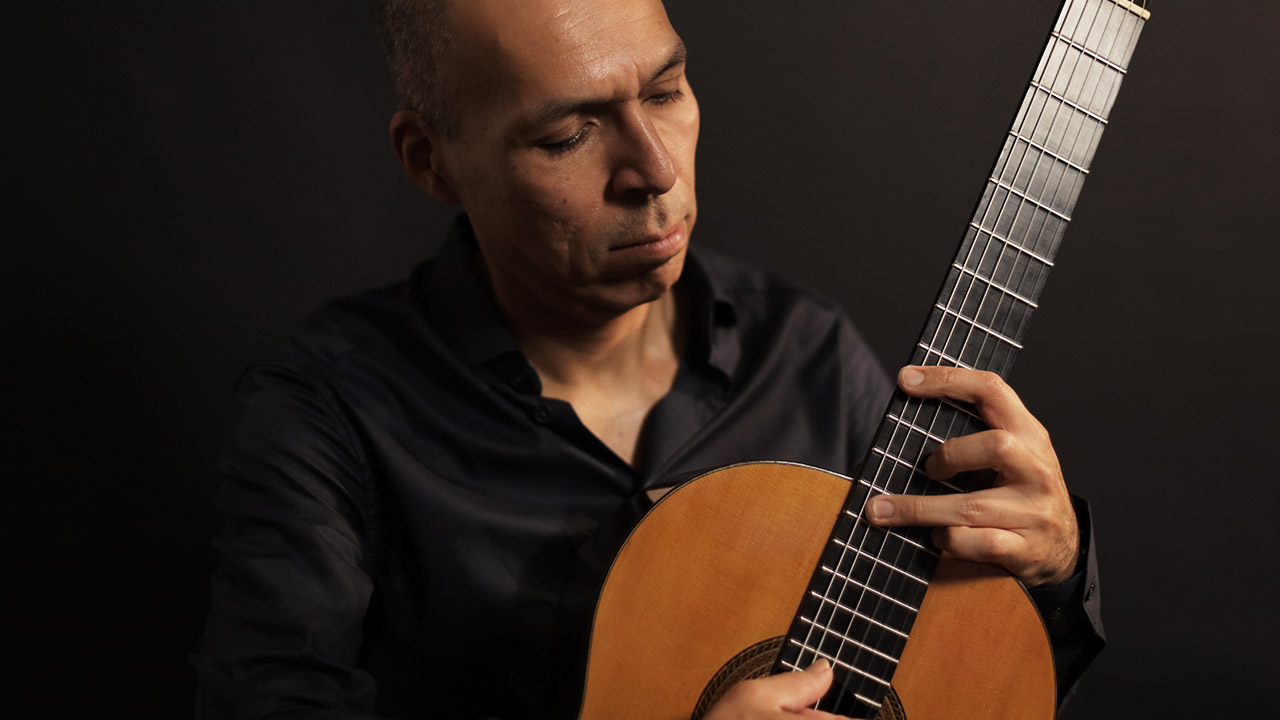 In the span of a decades-long career, Peruvian born guitarist and composer Jorge Caballero has accrued wide  recognition as one of the most important guitarists in history, being the recipient of several international awards, and performing in recitals, chamber music and as a soloist around the world.

Critics from international newspapers and guitar publications have praised Mr. Caballero’s depth of musicality, as well as his technical mastery when tackling the unique difficulties of his concert repertoire. Aside from the standard guitar literature he performs –which spans centuries of music from the Renaissance until the present, Mr. Caballero is notorious for adapting and performing masterworks originally written for piano or orchestra, among which we find Mussorgsky’s Pictures at an Exhibition, Dvorak’s New World Symphony, Debussy’s Children’s Corner Suite and Alban Berg’s Piano Sonata Op. 1 to name a few. One critic in Italy referred to Mr. Caballero as “standing on top of the repertoire’s Mount Everest,” while the New York Times called him “a masterly guitarist” with “chameleonic timbres.”

Since his first solo recital at age thirteen, Mr. Caballero has given numerous concerts throughout the world, including performances at Lincoln Center, Carnegie Hall and the Library of Congress, and as a soloist with the Los Angeles Philharmonic, Orchestra of St. Luke’s, New York’s Chamber Ensemble and Turkey’s Presidential Symphony. He has also collaborated with the Mendelssohn and the Miró String Quartets, with Soprano Theresa Santiago and flautists Stefán Ragnar Höskuldsson and Carol Wincenc.

Born into a musical family, Mr. Caballero began his guitar studies at the age of ten at the Preparatory Division of the National Conservatory of Music in Lima, Peru with Eleodoro Mori, and years later, with Oscar Zamora. At age 12, he tied for First Prize at the Conservatory Guitar Competition, which included participants at the college-level division more than twice his age. The following year, he earned Second Prize at the Peruvian National Guitar Competition sponsored by Jeunesse Musicale, competing in the adult category. His first international award occurred in Montevideo, Uruguay, at the First Latin American Guitar Competition. He was 15. Additional awards include top prizes at the Luis Sigall International Competition, as well as the Tokyo and Alhambra guitar competitions.

In 1996, at the age of 19, he earned First Prize at the Walter W. Naumburg International Competition in New York City, a unique award for musicians often compared to the Pulitzer Prize. To this day, he is the youngest musician and only guitarist to have ever received this award.

As of 2021, Mr. Caballero has been appointed to the  Guitar Faculty at the University of Toronto in Canada. He is also part-time faculty at Kean State University in the United States, and  Honorary Professor at the National University of Music in Lima, Peru.